Martaevious Santiago & Tedra King are siblings who resided in Florida City, FL with their mother Lakesha Bess, stepfather Vernon Williams, and other siblings.

Martaevious Santiago called 911 on his 17th birthday to report that he had shot his sister.

According to the Miami Dade Police Department, the victim, Tedra King, was located inside of the residence suffering from an apparent gun shot wound to the head.

Investigations revealed that while Martaevious Santiago was holding a loaded semi-automatic handgun, his sister, King was being playful with him as younger siblings are apt to do; it was also his birthday.

King hugged her brother while he held the handgun, and as she turned around to walk away, Santiago pointed the handgun to the back of the her head and pulled the trigger, shooting her.

Santiago was arrested and charged  with Aggravated Manslaughter of a child under 18 years of age / Possession of a weapon during the commission of a felony.

The firearm was provided by a friend, 14 years of age, who was also taken into custody for an outstanding Delinquency Warrant.

Martaevious Santiago had been sitting in a car with a friend in the driveway of his home when a barrage of gunshots erupted. 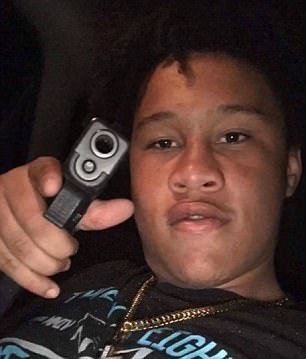 He got out and ran; his friend, who stayed in the car, was shot in the head and barely survived.

Eleven months earlier, his younger brother by a year, Martwan Santiago was shot four times on the street outside their old apartment, in a neighborhood locals call “The Alley.”

He was struck in his buttocks, leg and lung.  A bullet also went through his spine and destroyed a part of his collarbone.  Martwan was paralyzed from the waist down.

At the time, Martaevious said that he’d been to jail 18 times, mostly for robberies.