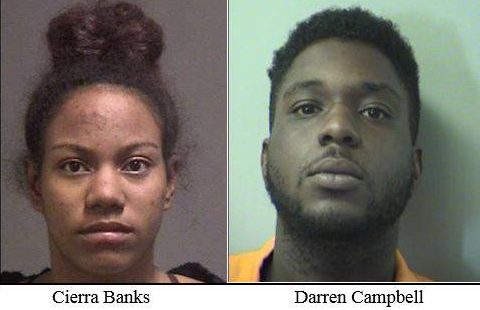 Darren Campbell & Cierra Banks were arrested by
Okaloosa County Sheriff’s Office deputies who tracked down a car to a Destin convenience store after receiving a call concerning a woman being held against her will in a red Jeep.

The car and its four occupants was found at the Texaco at 201 Harbor Boulevard Saturday night just before midnight.

The female victim and a teen witness say 22-year old Darren Campbell, no known address, and 17-year old Cierra Banks of Fort Walton Beach threatened to harm the victim and shoot up her house and family if she did not provide them with her vehicle or if she contacted law enforcement.

She says she drove them around because she was in fear for her life.

She also stated that she had to stop for gas at the Texaco and then went inside and called 9-1-1.

During a search of Campbell after his arrest deputies say he produced a clear plastic bag with pills later identified as Acetaminophen/Oxycodone Hydrochloride.

It also contained less than a gram of a white powder which tested positive as cocaine.
Banks and Campbell are both charged with robbery – carjacking without a firearm or weapon.

Campbell faces an additional charge of possession of a controlled substance.