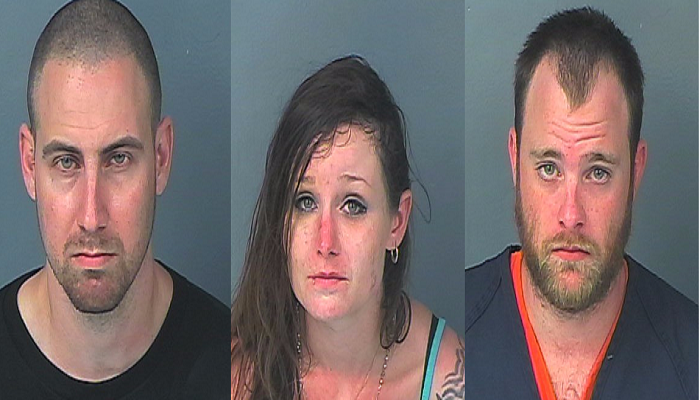 On 09-28-2016 at approximately 09:47 a.m., detectives from the Hernando County Sheriff’s Office Vice and Narcotics Unit executed a drug search warrant at 5509 Roble Avenue in Spring Hill.

This residence is located directly across the street from Spring Hill Elementary School. Sheriff’s detectives became concerned with the activity that was occurring at the residence, particularly because of the close proximity to the school.

Over the past year, the Sheriff’s Office received 54 calls for service, for various reasons, to this residence. On 08-30-2016, members of the Selective Enforcement Unit responded to this residence to locate a wanted person.

The detectives located Thomas Blackburn, who had warrants for his arrest. As detectives were attempting to put him in custody, Blackburn resisted arrest with violence. He was subsequently charged with Resisting Arrest, Possession of Methamphetamine, and Possession of other Controlled Substances.

On 09-03-2016, an individual at the residence reported an attempted armed robbery when two unknown suspects pulled a gun and demanded his money. During the course of the investigation, undercover detectives were able to purchase methamphetamine from Blackburn, on two occasions.

This led to detectives being able to obtain the search warrant. Pursuant to serving the search warrant, detectives located methamphetamine, oxycodone, scales, baggies, smoking pipes, and a shotgun which was in a bedroom that was occupied by Danny Moore and Rebecca Lashbrook.

Lashbrook was charged with Possession of Methamphetamine, Diazepam and Paraphernalia. Prior to the search warrant, Vice and Narcotics supervision made contact with the school administration to make sure that the students and teachers were safe and not near the operation.

Sheriff Al Nienhuis said, “Our Vice and Narcotics Unit works hard on a daily basis to keep our community safe, particularly when crimes like this occur near schools and/or playgrounds.”

Individuals arrested were as follows: